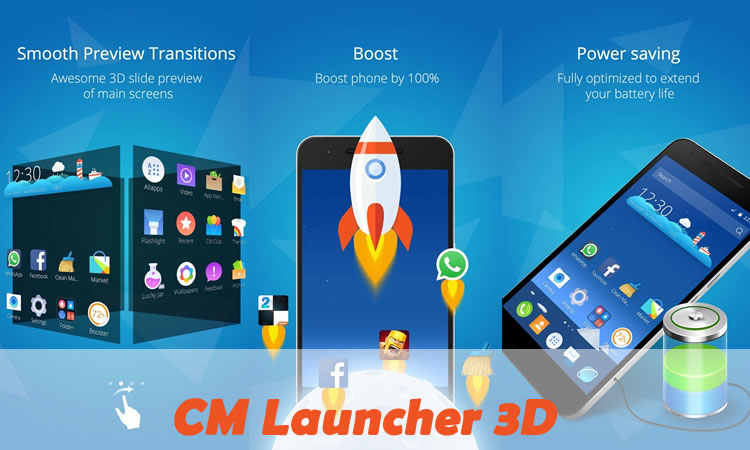 The CM Launcher 3D  by Cheetah Mobile has been causing quite a few shock-waves in the Android market since its release in early June, so I thought I’d download the launcher to review it for myself.

Once I’d downloaded the app, the first thing that impressed me was how quick it allowed me to access everything on my phone.

The CM launcher is specifically designed for Android phones, and its special features help improve both the look and usability of your phone.

In a deliberate attempt to speed up the functionality of your phone, the app itself is incredibly small in size. This means that you can download and install CM L1auncher 3D without taking up any of your phone’s system storage.

The CM launcher gives you a speedy response for whatever you need to do, whether that’s searching online, looking at photos in your gallery or just amending your phone settings. Okay, so now I was happy with my browsing speed, I wanted to check out how it could improve the appearance of my phone. The CM launcher wallpaper options are enormous, and I spent ages trying to find the right wallpaper for my phone. It was the same when I browsed through the CM launcher themes, and I found both settings really easy to navigate.

If you ever did get bored with the themes already provided by the app, the CM launcher 3D boosts stylish design to the max by allowing you to create your own theme through its DIY function.

Some of the most innovative and exciting design features of the CM launcher are its 3D graphics. When you’re swiping your way through the desktop, it allows you to feel as though you’re lifting the graphics straight out from the phone. The 3D desktop, alongside the speedy design of the app, provides a user-friendly way to maneuver smoothly between all elements of your phone.

CM Launcher 3D also offers an attractive way to view all of your photos in its 3D gallery display. And, one of the attention-grabbing features is its 3D clock widget which may just prove to be a design classic of the future.

I think one of the most important issues facing Android users is the fear of their phones being hacked.

The CM Launcher 3D has managed to circumnavigate this problem by using one of the most powerful anti-virus software currently available on the market to help keep your phone safe from such attacks.

It also takes individual privacy seriously by allowing you to easily hide apps away from prying eyes.

The CM Launcher 3D has been created to take on board some of the most important design elements that are of importance to today’s Android users.

The stylish design works in harmony with its speedy performance and its focus on personalized choice is an attractive option for many.

As a new app launcher, it has the competitive edge to challenge many of its current rival launchers at the top of the field.

If you’d like to see if this launcher can improve the performance of your phone, you can download the CM launcher app from the Google store.